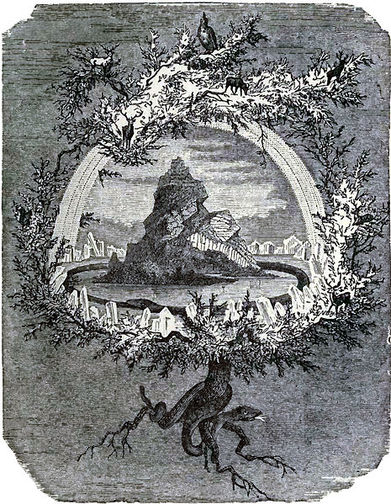 Yggdrasil, the World Tree, holds the Nine Worlds.
The Asatru/Heathen religion: Yggdrasil and the Nine Worlds
The cosmos is held within the branches and roots of the World-Tree, Yggdrasill – the vertical axis of the universe, which both separates the underworld, the world of humans, and the over-world, and unites them within its structure. The language used to describe this tree in the Eddas is often difficult to understand; the Prose Edda for instance, says that it has one root in Nibel-Home, one in Etin-Home, and one in the heavens, in the Ases' Garth or Asgard; which presents a certain problem of visualization. What this means, however, is that these three realms – the world below, the middle world, and the world above – are the three sources of might from which the life of the Tree stems, which weave Wyrd together. The Tree is the living embodiment of all that is and is becoming. At its roots, deep in the Well of Wyrd, many serpents gnaw and the dragon Nith-Hewer (ON Nidh-höggr) coils. The four harts Dain, Dvalin, Duneyr, and Durathror run in its branches and feed on its bark and leaves. These stags may be the same as the four dwarves Northri, Suthri, Ostri, and Vestri (“North, South, East, and West”) who hold up the corners of the world on the horizontal plane; Dain and Dvalin are dwarf names, and the stag is a fetch-shape taken by dwarves during the day, since they themselves are turned to stone by the light of the sun. At Yggdrasill's crown sits a wise eagle, with the hawk called Vedrfolnir between his eyes, and the squirrel Ratatosk runs up and down the tree to carry insults between the eagle and Nith-Hewer.
The Well of Wyrd, in which the roots of Yggdrasill lie, is divided into three aspects, which encompass the three levels of the vertical plane. First, and eldest, is Hvergelmir (“Seething Cauldron”) in which the serpents and the dragon lie. This well, as mentioned before, lies in the underworld, in Nibel-Home: the yeasty rivers of might first sprang forth from it. Second is the well of Mímir, which lies in Etin-Home, guarded by the wise etin Mímir; it is the Well of Memory, which holds the knowledge of all that is. Wodan's right eye lies in this well, as does Heimdallr's horn (or hearing; see the section on Heimdallr in chapter 4). Third is the Well of Wyrd (ON Urdhr), which lies in the Ases' Garth, and where the god/esses speak their laws and decisions. This triple well, when spoken of as a whole, is also spoken of as the “Well of Wyrd.” From the level of Hvergelmir comes the essential force of being; the level of Mímir shapes it according to the ørlög (see below) of what is; Wyrd is the level at which the Norns cut staves, lay ørlög, and decide what shall be. All works of great might take place, literally or metaphorically, at the Well of Wyrd.
The Ases' Garth is sometimes seen as sitting on the top of a mountain, sometimes in the upper branches of Yggdrasill. It can be reached only by crossing over Bifröst, the fiery Rainbow Bridge, which is warded by the god Heimdallr. Many rivers flow about Bifröst and are heated by its flames. The gate of the Ases' Garth is called Walgrind (“Gate of the Slain.”) The Ases' Garth is divided into twelve realms, as described in the Eddic poem “Grímnismál.” The greatest is Bilskírnir in the land of Thrúdh-Home (“Strength- Home”) where Thunar dwells; Yew-Dales, where Wuldor's hall stands; Wal-Seat, a hall of Wodan's; Sunken-Bench or Fen-Hall, Frija's hall where Wodan comes to drink with her; Glad home, the realm where WaIhall stands with spears as its rafters and a shield- shingled roof; Thrymheimr, Skadhi's udal (ancestral) hall; Broad-Shining, where Balder dwells; Heaven-Berg, Heimdallr's hall; Folk-Meadow, Freyja's land, where her hall Seat-Roomy is built; Gleaming, the home of Forseti, which is propped up with gold and shingled with silver; Ship-Stead, Njördhr's dwelling; and Wide-Land the wooded stead where Vídharr dwells and rides out. Alfhome, which Fro Ing rules, is also mentioned as part of the holy lands, but it is not numbered among the twelve, being a separate world. These halls are peopled by the ghosts of those humans who were the friends of each of the god/esses in life.
The winds of woe are those which blow from the northwest, north, northeast, and east; the winds of weal blow from the southeast, south, southwest, and west. However, the north and the east are also the directions of the greatest might. All might flows first from the well Hvergelmir in the north, and the north is where the roots of all being lie. The east, Etin-Home, is the direction from which this might rises up into the worlds; Fro Ing comes from the east in his wain, bearing life, and the east is the direction of the rising Sun. Nearly all rites are carried out either facing north or facing east.
(Excerpt from the Asatru book Teutonic Religion by Kveldulf Gundarsson. Used with permission. To purchase an e-copy of the entire book Teutonic Religion, click on the link.)