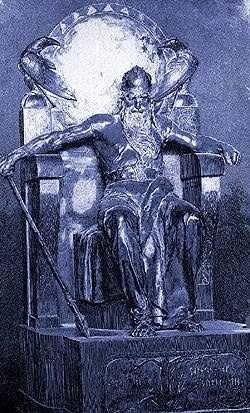 Odin, Woden, Wotan, or Odhinn
The gods of Asatru: Odin, Wodan, Wotan, or Odhinn
This god, whose name means "Master of Fury," appears in the Viking Age literature as the highest and most powerful of the gods. Of all the gods, he is the most mysterious and the most complex.
The origins of Odin's cult are very uncertain. He is first known as a god of poetry, magic, and death, which were very closely related in the Germanic mind, as the religious/magical wod ("fury/inspiration") of poetry was understood to come from the world of the dead. As the god leading the souls of the dead to the Otherworld, Odin may have then been identified as the chooser of the dead and then specifically with the selecting of the slain in battle.
Above all, Odin or Wodan is a god of wisdom. His wisdom is not, however, that of peaceful serenity, but that of continuous, restless activity; his is the furious might of the storm wind, which is never stilled. The tales of Odin or Wodan show him on his endless search for knowledge, forever growing and forever seeking to become greater.
He is also the sacrificer of self to self, as it tells in the Eddas. He discovered the runes by hanging nine nights on the World-Tree, pierced by his own spear; he also gave up one eye for a drink from Mimir's Well, the Well of Memory. As Har ("the High One") he sits on Hlidhskjalf, from which he can see everything that happens in the Nine Worlds, but he is never content merely to watch. Odin or Wodan often travels through the worlds, cloaked in any number of disguises, in o0rder to seek out knowledge wherever it might be.
He is a god of subtlety and deception. This probably stems from his nature as a god of all verbal skills, including runic writing and poetry; it may also be connected with his aspect of , or leader of souls.  As the leader of souls from the world of the living to the worlds of the dead, it was also understood from an early time that Odin was able to lead the dead back again to the world of the living. One of his most powerful aspects does not appear in the Eddas, but survives very strongly in the folklore of all the Germanic peoples: that of the leader of the Wold Hunt. From Winternights to Ostara - the autumn/winter half od the year - particularly during the twelve nights of Yule, Odin leads the dead through the storm behind a pack of ghostly black hounds with red eyes. For the living to be out of doors when the Wild Hunt is riding is to risk madness or death; this is Odin in his oldest and most terrible form, an aspect that few indeed are prepared to meet. The same nature, however, is also the source of one of his most weal-bringing aspects: the ancestor-god, the god who brings about rebirth and ensures the continuance of the family line by bringing the powers of the ancestral soul forth from the worlds beyond into the Middle-Garth (Midgard.)
Wodan the ancestor-god appears not only as the guide of the family-souls, but as the direct father of a number of clans of heroes and kings.
Odin is no faithful husband to either of his wives (the goddesses Frigg and Freyja.) He fathers various clans on mortal women, his son Vidharr is the child of a giantess, while Vali is the son of a human woman whom he enchanted.

(Excerpt from the Asatru/Heathen book Teutonic Religion by Kveldulf Gundarsson. Used with permission from the author. Click on the book title to go to a website where you can purchase an e-copy of the entire book.)