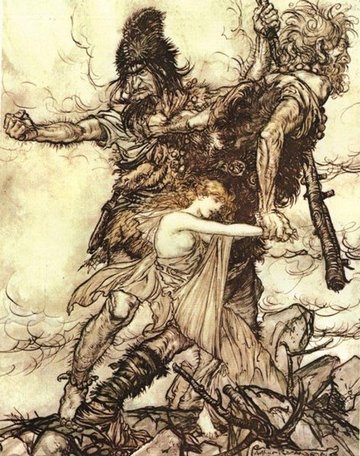 Giants seizing the goddess Freyja.
ETINS, RISES, THURSES, AND TROLLS
These wights are the children of Ymir, dwelling in the wild realm of the Out-Garth. In the religion of the North, they usually embody the forces antagonistic to human kind – the forces of raw nature, which Thunar and Fro Ing ward us against. They are the man-eating fiends that haunt wild places; they are outlaw wights, beings of unholiness. All of them are very closely connected to the realm of death; they are the eaters of the dead, against whom Thunar's hammer hallows the funeral pyre and the memorial stone.
The etins (Old Norse jötnar, singular jötunn) are primeval beings of great wisdom, able to meet with the god/esses on equal terms – and to breed with them; Wodan's mother was the etin-maid Bestla. They are wise wights, skilled in the crafts of magic. Some are helpful; the wisest of all the etins is Mímir, Bestla's brother, keeper of Mímir's well, to whose head Wodan goes for rede in times of trouble; the goddess Skadhi is herself an etin and the daughter of one of the Ases' Garth's great foes; and the prophetess who speaks to Wodan in the Eddic poem “Völuspá” speaks of having been fostered by etins in the earliest times. Most of the etins are terrifying beings; however, the word “etin” comes from a root meaning “to eat” – like all of Ymir's children, they are devourers of light and life.
Though there is not much evidence for worship given to any of the etin-kind except Skadhi, the two etins Ægir and Ran, who rule / embody the frightful aspects of the sea, are often mentioned in the myths of the North. Ægir is the brewer of ale for the god/esses' feasts; this image may have come first from the ale-froth cast up by the sea. Ran, whose name means “robber,” is ever greedy for the souls of the drowned, whom she catches with a silver net and welcomes in her hall beneath the sea. The nine daughters of Ægir and Ran are the nine waves: Himinglaeva, Dufa, Blódhughadda, Hefring, Unn, Hrönn, Bylgja, Bara, and Kolga. If you should be in peril from the sea, these are the wights against whom your workings should be aimed.
The rises (ON rísir) are the mountain-giants of folklore; the thurses (ON thursar) are also elemental giants of various sorts: rimethurses, cliff-thurses, and so forth. The rises may occasionally be helpful to humankind; the thurses are always foes to the Middle-Garth. By and large, rises are not terribly intelligent and thurses are downright stupid.
All ill-meaning or ugly wights of the Out-Garth can be called trolls. Most trolls are man-eaters, though some also kidnap human women or men to be their mates. In one Icelandic folktale, a man who was enchanted by a troll-woman and went to live with her slowly turned into a troll over the course of three years. There are also some indications – such as the nickname “Half-Troll” which appears in several of the sagas, and the insulting accusation that someone has slept with a troll – that briefer affairs between trolls and humans have been known to take place. It is also sometimes possible for the trolls to take over a human mind.
Trolls range in size from giantish to smaller than humans. Daylight always turns them into stone. In spite of their well-earned reputation for fearsomeness, individual trolls can be friends with individual humans; an Icelandic compliment says that someone is “trusty as a troll.” In Swedish folklore, if you can trap a troll into taking a gift from you – tossing a piece of food into its jaws when it opens them to speak or take a bite is a favored method – it must then work weal towards you the rest of its life. In rocky, wild mountain places, trolls and land-wights may overlap to such a degree that it is impossible to make a distinction between them. I myself have one friend who spent a great deal of time in the mountains and got on very good terms with the trolls dwelling there (whom he has also come to resemble a little...). The trolls were never worshipped; however, if you should come to befriend one, you might take to leaving food out for it.
(Excerpt from the book Teutonic Religion by Kveldulf Gundarsson. Used with permission. To purchase an entire e-copy of the Asatru/Heathen book Teutonic Religion click on the link.