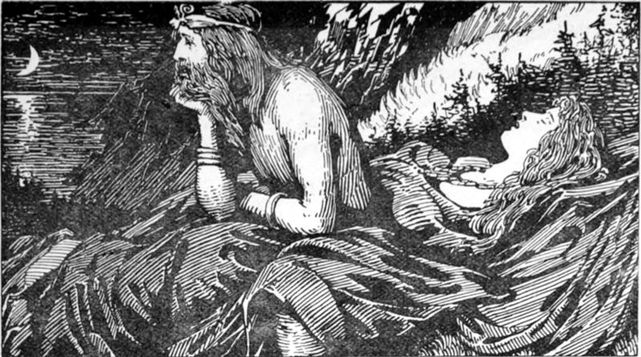 Njörd's desire of the Sea (1908) by W. G. Collingwood
The gods and goddesses of Asatru: Njord and Nerthus
The name of this North German goddess, Nerthus (coming from a root meaning “under” – the same root that Modern English “north” is derived from), is precisely the same name as that of the Old Norse god Njördhr or Njord; only the gender and linguistic form are changed between the Proto-Germanic and the Old Norse. The same deity may have been known as a god or a goddess in different places; Nerthus/Njördhr may have been an hermaphrodite; or else the two, god and goddess, were (like Fro Ing and the Frowe) seen as a pair of twins and lovers. In “Lokasenna,” Loki accuses Njördhr of having gotten Freyr and Freyja upon his own sister, and mentions also that the latter pair had committed incest; Njördhr's sister is never named, but it is easy to believe that the two were originally a male/female pair of identical twins. This belief is borne out by the complementary character of the two; while both have islands as holy steads, Njördhr is described as a god of the sea in all the Norse sources, while Nerthus is “Terra Mater,” “Mother Earth.” United, they rule the whole of the world characterized by mysterious depths, fruitfulness, and hidden wisdom and might; the dark Wanic world of earth and water. The mightiest holy steads of the Wans are islands and bogs, where the two come together.
The Wanic cult is as closely associated with the cults of the dead as with the fruitfulness of the land, and for much the same reason: as the rulers of earth and water, Nerthus, Njördhr, and their children receive whatever is put into the darkness, even as what springs forth from it is their gift. The Wanic ship is the means of crossing from one realm to another; it is the funeral ship of the burial as well as the ship of life. This can be seen in the prologue to Beowulf, in which it is told how the Wanic king Scyld Scefing (“Shield Sheaf-Descended,” a name which points to this figure as one of the rulers embodying the might of Fro Ing/Freyr) was sent over the waters in a ship as an infant – sailing into the land of the living. After a long life as a mighty warrior and great leader, Scyld, on his deathbed, orders that he be put into a boat again and sent out onto the waves, and so his boat is laden with great treasure.
Perhaps for the same reason, the Wanic god/esses are strongly associated with riches; the dead were buried with their possessions, many of which were very fine, therefore the realm of the Wans was that which held the most treasure. Snorri says of Njördhr that “he is so rich and blessed with wealth, that he may give (to humans) great plenty of lands and things, and he shall be called upon for this,” and of Freyr that “he rules also the prosperity of humans.”
Although they are not of the kin of giants, the Wans mate freely with these wights. Njördhr and Fro Ing (Freyr) both take wives from the giant race; these wives, Skadhi and Gerdhr are both embodiments of the frozen earth who must be “melted”; and in both cases, the process involves a symbolic emasculation (displaced onto Loki in the tale of Skadhi and Njördhr). The Frowe (Freyja), in turn, is the chief object of giantish desire, though none of these wights ever succeed in getting her.