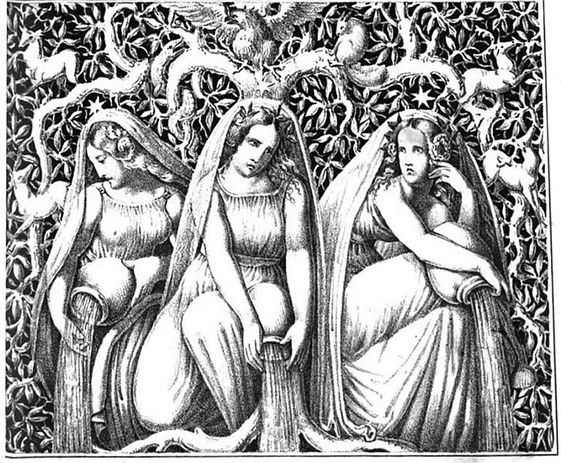 The Norns Urd, Verdandi and Skuld
The Norns (Urd, Verdandi and Skuld) in the Asatru and Heathen worldview:
After the gods had shaped and set the worlds, three mighty maids came out of the east, from Etin-Home. These maids are Wyrd (ON Urdhr – “that which is”), Werthende (ON Verdhandi – “that which is becoming”), and Should (ON Skuld – “that which should become”). They are the “weird sisters” of Macbeth, the three wise women who tell the warrior his future and that of his line.
It is they who sit at the Well of Wyrd, laying the layers of being which shape the ever-growing tree Yggdrasill; thus they shape what shall become of humans and god/esses alike. The term used in Old Norse to describe this fate is ørlög: the ur-(“proto”) law or the “primal layer” This is used because the first layer of being – the first actions, the first words spoken – shape all the following layers which grow out of it and are laid upon it; the first primal pattern is the pattern which names the terms of being, becoming, and ending. This idea appears in a number of legends throughout the Indo-European world; the hero/ine's life and death are described on the day of his/her birth or name-giving, and thereafter all must follow as it has been spoken – as it should become.         This is the same for the Nine Worlds as for the individual life; all things, however great or small, have their ørlög which cannot be escaped, their own personal wyrd. Wyrd cannot be escaped; it is the act of a nithling (“despicable coward”) to flee it but the hero/ine, knowing his/her wyrd ahead of time, goes boldly and even joyfully forth to meet it. Wyrd may be written around – events arranged so that what should/must be will, in the due course of time, work out for the best – but it cannot be escaped.
Wyrd (Urd), Werthende (Verdandi), and Should (Skuld) are also the embodiments of time in the Germanic world. The Teutonic time-sense is not divided, like the Mediterranean, into a linear past present and future. Rather all that has ever become exists now – it is – as the living roots and the ur-layers which shape the sharp-edged moment of becoming, of the present. Without the use of modal verbs (should, will, might), it is impossible to speak of the future in any Germanic language, including English. Unlike Latin, we have no future tense; we see what is and what is becoming, with only a shadow of that which these ur-layers should shape.
(Excerpt from the Asatru/Heathen book Teutonic Religion by Kveldulf Gundarsson. Used with permission. To purchase a copy of the entire e-book Teutonic Religion, click on the link.)