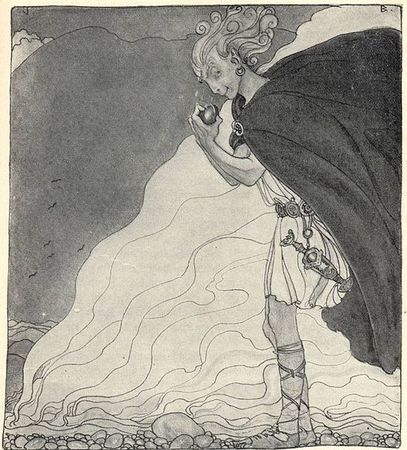 Loki with the heart of Gullveig.
The gods of Asatru: Loki (Lopt, Lothur, Lodhurr)
Traditionally, Loki is understood as a wight of fire – the embodiment of that element which, as Loki is, is an untrustworthy servant, a deadly master, and an indispensable companion. He has also been identified as Lódurr, who, together with Wodan and his brother Hoenir, gives life to humankind. The gifts of Lódurr are physical appearance and vital warmth; Loki himself is described as being handsome and fine to look at, and as a fire-being, he quite naturally would be the giver of bodily warmth.
According to Snorri, the gifts given by Lódurr were “appearance, speech and hearing and sight”-the bodily senses.
In the myths, Loki is shown as tricky and untrustworthy. He gets the god/esses into trouble almost continually, playing a constant game of double-agentry between the god/esses and the giants in which he is always betraying one side to the other. He delights in malicious practical jokes and the giving of deceptive redes; yet when forced to make reparations, he has been the source of many of the best treasures possessed by the god/esses – Wodan's horse Sleipnir and the ring Draupnir; Thunar's hammer, Fro Ing's boar and ship. In all things, he embodies the force of change – sometimes for good, sometimes for ill. As Snorri says, “Time and again he has brought the gods into great trouble but often rescued them by his wiles.”
Loki is the son of the etin Fárbauti (“Cruel Striker”) and a female named Laufey (“Leafy Island”). He is usually referred to as “Laufey's son,” which may imply that he is a bastard, since the Norse “surnames” were normally derived from the father. He has a brother named Býleist, about whom nothing is known; the name given to Ódhinn in the list of Loki's kindred is Helblindi, “Death-Blind,” which may reflect back upon the Balder episode. He is often called “Loptr,” “he who flies aloft,” and in “Thrymskvidha” he borrows the Frowe’s (Freyja's) cloak of falcon-feathers to fly over Etin-Home and find Thunar's stolen hammer.
Loki also has a darker side: he is the father of the Wolf Fenrir, who will slay Wodan at Ragnarök and of the Middle-Garth's Wyrm, Jormungandr, against whom Thunar will fall. He fathered these two wights on the giantess Angrbodha, “Distress-Bringer.” Some of the Scandinavian sources, most notably Snorri also identify Hella as Loki's daughter; but this is more likely to be a consequence of Christian contamination than a genuine tradition (see the chapter on Soul and Afterlife). In “Völuspá hin skamma,” it is said that Loki ate an evil woman's half-burned heart and thus became pregnant, giving birth to every female monster in the world. He forged the sword Lævateinn, “Guileful Twig,” with runes beneath the gates of Hel.
The theme of ergi (passive homosexuality/cowardice) is strong in many of the portrayals of Loki. To get the god/esses out of the bargain they had made with the mason who was building the walls of the Ases' Garth, he turned into a mare and lured the mason's stallion away; from this union, Loki bore Wodan's horse Sleipnir. Since the worst insult that could be given to a Germanic man was to call him a mare, this can fairly be taken to show a certain defectiveness in Loki's person. The pregnancy mentioned above also falls into the category of ergi, as does Wodan's accusation (in “Lokasenna”) that Loki had been a milkmaid beneath the earth for nine winters and had born children. He also borrows Freyja's falcon-skin at least twice so that he can fare to Etin-Home, which can be taken as metaphysical cross-dressing, since the falcon-hide is usually worn only by goddesses.
Of all the gods, Loki is most closely associated with Wodan (Odin.) It has been said before that Loki often seems to act as the agent of Wodan's will, either when expressed overtly – as when Wodan orders him to steal the Frowe's (Freyja's) necklace – or when the command is hidden, as in the case of the death of Baldr. Part of the oath of blood-brotherhood which Wodan and Loki swore was that for every horn of drink given to Wodan, Loki should have a horn also. In a very real sense, Loki is Wodan's shadow – though, paradoxically enough, he also seems to embody the sense of humor and lightness of being which is largely absent from most portrayals of Wodan.
Loki also appears in several of the myths as the travel-companion of Thunar (Thor); his swift wits often serve to get the stronger god out of tight situations. As Thunar's friend, Loki represents the traditional companion of the hero – the comic, practical “Sancho Panza” figure. As Alice Karlsdottir points out in her article on Loki, both Loki and Thórr are agents of change and even of destruction in their own way – as mentioned above, Thunar does not hesitate to break the standard codes of behavior when he sees the need, even to attacking a guest. Thus, she suggests, the distinction which many moderns seem to draw between Thórr – good / Loki – evil is an artificial line through a very blurred territory. Nevertheless, when Loki goes too far, it is Thunar's might which forces him to make amends; it seems that Thunar is the only one of the god/esses whom Loki really respects, as his speech at the end of “Lokasenna,” when Thórr at last comes into the hall, shows. “I've said before Ases and before Ases' sons whatever whets my thoughts; / before you alone I shall go out, / for I wit that you will strike.” Thus, when Loki's presence in your life becomes unwelcome, it is good to call on Thunar to hold him back.
The only creatures associated with Loki are the spider (in Scandinavian folk-tradition) and the fly, which is a shape he takes at least twice in the myths.