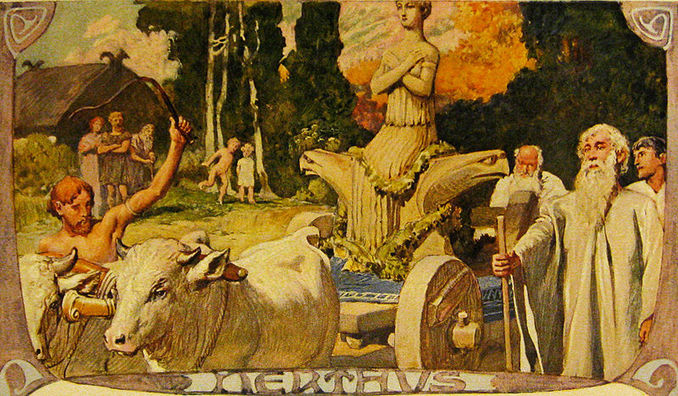 A procession for the Vanic goddess Nerthus.
The gods of Asatru: The Vanir
The origins of the Wans (Vanir) are not known. Because cattle seem to have been such an important element in their cult, and because their nature as god/esses of fruitfulness and sources of basic life-energy seems to imply it, it is possible that they may be in some way descended from or related to the ur-cow Audhumbla, who was formed from primal fire and primal ice along with the first giant Ymir and whose milk provided the nourishment for Ymir and all his children. Nothing is recorded of this being's fate in any of the Norse creation stories; she vanishes into the unknown – and the Wans (Vanir) arise from the unknown.
The earthly pattern of the development of the Wanic cult is almost as cloudy; it is not certain whether they, like the Ases, are directly descended from Indo-European originals or whether the existing religion of the non-indo-European peoples among whom the Germanic peoples settled had some part in determining the perception of these beings.
The Wans seem to have occupied a much more powerful place in the overall religion and thought of the Germanic peoples than did the “third function” deities of the indo-Europeans, and it may be that this perception of their significance had something to do with an earlier position as chief god/esses of a religion which was assimilated into that of the Indo-European settlers.
In the natural world, the Wans are associated with earth and water; in the social world, with family, prosperity; and material sufficiency; in the world of the mind and soul, with deep wisdom, intuition, and prophecy. They are embodiments of the basic life force which nourishes and preserves.
(Excerpt from the Asatru/Heathen book Teutonic Religion by Kveldulf Gundarsson. Used with permission. Click on the book title to go to a site where you can purchase an e-copy of the entire book.)