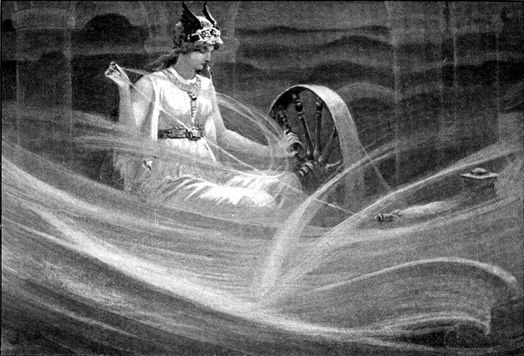 The goddesses of Asatru: Frija, Frigg or Frigga
Frija or Frigg is the first wife of Wodan (Odin), and the only goddess who appears in what might be called a traditional domestic arrangement with him. Her name comes from an Indo-European root meaning “pleasure” or “beloved.” Although she shares the traits of fore-sight and silent wisdom with the Wanic god/esses, there is nowhere any implication that she is not one of the Ases. She gives her husband counsel, as the Anglo-Saxon “Maxims” says the wife of a great man ought to do:
And wife / (shall) flourish / loved among her people be of bright mood / hold secret counsel (or “hold runes”) be bountiful in heart / with horses and treasures at the mead-counsel / before the kin of the warband always everywhere. / The protector of athelings (“nobles”) she shall greet first / the first cup to the fro's (“lord's”) hand / swiftly reaching and knowing rede for him / the land-owners both together.
Very little is recorded about the cult of Frija, but there is reason to think that it was quite significant in Germanic cultural and religious life. All that we know about Frija (Frigg) portrays her as a goddess of domestic affairs and one of the main supporters of social and cultural norms. This side of her character appears strongly in “The Flyting of Loki,” where she counsels Loki and Odin, “Your ancient ørlögs you should hide / and stay far from saying / what the two Ases in ancient days did / keep it ever from ken of men.” She is, above all, the patroness of marriage and of childbirth – a goddess for mature women, as Freyja and Gefjön are for younger women. Frija also represents the figure of the “peace-weaver,” the woman who makes peace between men when their pride will not allow them to compromise. This was a vastly important aspect of the woman's social and political function among the Germanic folk, as seen by the figure of Hrothgar's queen Wealtheow in Beowulf: Wealtheow is both counselor to her husband and a diplomat who keeps peace among her husband's warband and deals with the foreign warriors who have entered the hall.
The constellation which is generally known as “Orion's Belt” was called “Frigg's Distaff” by the Norse. The scarcity of references to the practice of the cult of Frija makes it difficult to prove; however, given her position as a goddess of the household and of women's affairs in particular, it is probable that the distaff was as much a symbol of Frija's power as the hammer was of Thunar's, or the spear of Wodan's. The significance of spinning and weaving to the social organization of the Norse should not be underestimated; Iceland's primary export and source of economic stability in the Medieval period (and up until at least 1600) was the cloth produced by its women!(9)
Her role as goddess of cloth-craft points the way to understanding another side of Frija's character: that of the silent seeress who “ørlögs . .. all knows, / though she herself does not speak.”
The protective power of motherhood is also specifically associated with Frija (Frigg.) It is also to her that prayers seem to be first offered for the conception of children, as in Völsunga saga; while her husband brings the heroic kin-soul to his chosen line, Frija (Frigg) makes wives fruitful.
Although she is Wodan's wife, and her role is often misconstrued to be solely that of the domestic, if sometimes shrewish, housewife, Frija (Frigg) never appears as submissive or subordinate to her husband in any way. He asks her for advice on matters of significance; at times, when their wills cross, her cunning proves to be greater than his.
(Excerpt from the Asatru/Heathen book Teutonic Religion by Kveldulf Gundarsson. Used with permission. Click on the book title to go to a website where you can purchase an e-copy of the entire book.)