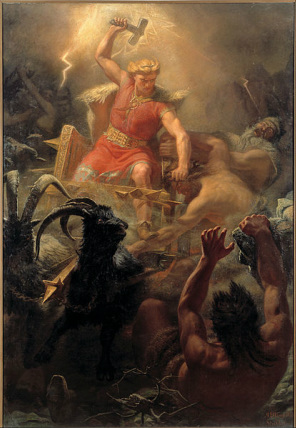 Thor in battle with the giants.
The gods of Asatru: Thor (Thorr, Thunar, Donar, Donner)
Thunar (Thor) was and remains the most beloved and most often called upon god of the Germanic peoples in general. His name means “Thunder,” and it is through the might of his thunder and the lightning he wields that our ancestors first came to know him; the god of strength, of might and main; the warrior who fights ceaselessly against the thurses that menace the walls of our world, the Middle-Garth. A common picture of the earliest religions is of primitive humans cowering in terror before the thunder. For the peoples of the North, this is a false image; for us, Thunar has always been the protector and friend of humankind, flinging his hammer of lightning to ward us from all wights of ill.
Thunar (Thor) is the son of Wodan and the Earth. From his father, he has inherited the powers of the air, of storm and wind; from his mother, he has gotten his matchless might both as an inherited part of his nature and through the gift of the belt Megingjardhr, the girdle of strength. In the natural realm of being, he brings earth and sky together through the lightning and rain which unite them; Thunar is called upon to bring the beneficial storms which make the fields fruitful and to ward off the hail which destroys the crops. He is married to Sif, whose golden hair represents the fields of grain which the lightning of late summer was supposed to ripen. By her, he has fathered his daughter Thrúdr (“Strength”). Thunar also fathered two sons, Módhi (“Courage”) and Magni (“Might”), with the giantess Iron-Sax. These three children can be seen as embodiments of the three special gifts of Thunar to his worshippers: the courage of the warrior who trusts in his own power; might in the sense of spiritual/psychic power – the might of the soul; and strength both physical and mental.
In the religion of the Teutonic peoples, Thunar (Thor) is not only the warder of the Garth’s walls against the wights without but also the god who holds up the pillars of the house and the hof. He is the guardian of social order; not the rigid, legalistic order embodied by Tiw, but the order maintained when everything is going along as it ought.
When reading Germanic holy writings or studying folklore, it is easy to get the impression that Thunar (Thor) is a relatively uncomplicated character; a “good ol' boy,” always eating, drinking, or bashing the bad guys. It is true that Thunar is not a god of subtle wit, who often comes out second in contests where verbal and deceptive skill are the primary factors. He does not, like Wodan, seek wisdom for its own sake; when he fares to Etin-Home, it is to fight or else to bring back physical objects of power for specific ends. The wisdom Thunar displays is the wisdom of common sense; his intellect is not showy but practical.
Thunar (Thor) is the mortal foe of the Middle-Garth's Wyrm, the great serpent Jörmungandr which wraps around the world. Without Thunar’s might holding it down; the Wyrm would rise up to destroy the cosmos. The Thunderer meets the Wyrm three times: twice early, first in the hall of Utgardh-Loki where he attempts to lift it, the Wyrm having been disguised as a cat; secondly in the fishing expedition described in the Prose Edda (pp. 46 – 47) and in “Hymiskvidha.” Lastly, he will fight it single-handed at Ragnarök, where he will slay it with his hammer and be slain by its poisonous breath. The battle between Thunar (Thor) and the Middle-Garth Wyrm which takes place during the fishing expedition is important for understanding Thunar's role. This event has its parallels all through Indo-European history; it is the Northern expression of the truth behind all dragon-slayer legends. Thunar (Thor) goes fishing and brings up the Middle-Garth Wyrm; he strikes it on the head with his hammer, causing the earth to shake; the serpent sinks back into the sea. The Middle-Garth Wyrm embodies the untamed, rampant, and frequently destructive energies of the earth. By striking it on the head, Thunar, who is himself an embodiment of the unification of sky and earth, pins it down; its power hereafter must hold the world together until it frees itself from the effects of his blow at Ragnarök.
Thunar (Thor) appears as a burly man with red hair and a red beard which bristles with sparks when he is angry. He is always shown with his great weapon, the short-handled hammer Mjöllnir. “'the Crusher” which is also called “Thrúdh-hamarr”, “Hammer of Strength.”
Today Thunar (Thor) is called upon for hallowing and for warding in all things.
(Excerpt from the Asatru/Heathen book Teutonic Religion by Kveldulf Gundarsson. Used with permission. Purchase an e-copy of the entire book Teutonic Religion here.)