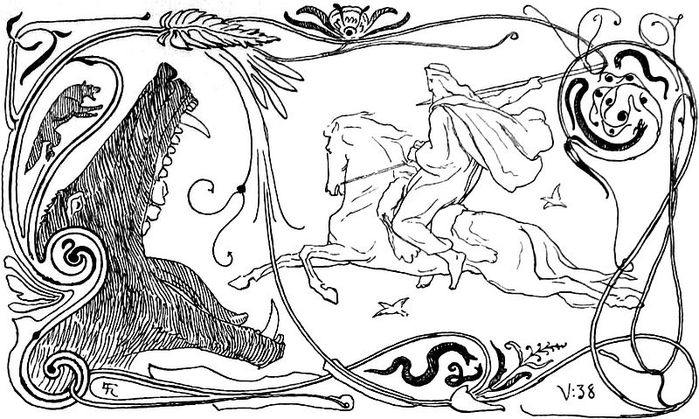 Odin and Fenrir at Ragnarok.
The Asatru/Heathen religion: Ragnarok
As with the beginning of the worlds, so with the end; the ørlög of the cosmos was laid in ice and fire, and so shall its wyrd one day turn towards an end – Ragnarök, “Doom of the Gods.” The final battle shall be preceded by the Fimbulwinter – a lightless winter which lasts for three years without spring. During this time all human social bonds shall be broken as all the order set up by the god/esses at the beginning of the worlds disintegrates. Neither kin nor troth shall hold anyone's hand from murder; the world shall become lawless. Finally the wolf SkolI shall swallow the sun, and the wolf Hati shall swallow the moon. Then all bonds shall break; the Wolf Fenrir shall run free, and Loki be freed from his bonds, and the sea shall rise onto the land because the Middle-Garth Wyrm, no longer confined to holding the boundary between the Middle-Garth and the Outgarth, will rise up and crawl onto the land. The earth will shake everywhere, and the ash Yggdrasilll will tremble. The ship Naglfar, made of dead men's nails, will float, bearing a cargo of foul ghosts and steered by Loki humans will tread the road to Hel. The Muspilli, led by their drighten Surtr, will come forth from Muspell-Home to burn the worlds.
In the last battle, which takes place on the field Vígrídr, Thunar will meet the Middle-Garth Wyrm again; he shall slay it, then stagger back nine paces and die from the venom it sprays. Loki and Heimdallr shall slay one another, as shall Tiw (Tyr) and Garm (the hound which guards the gates of Hel). The Wolf Fenrir shall swallow Wodan (Odin); Vídharr shall then set one foot on the Wolf's lower jaw, seize his upper jaw, and tear them asunder, and so shall Wodan be avenged. Then Surtr and Fro Ing (Freyr) shall battle; Fro Ing, armed only with the horn of a stag, shall fall before Surtr's sword and Surtr shall cast fire over the earth and burn everything.
After all has been destroyed, there will be left only the sea. Then a new earth shall be born, green and fair; before Skoll eats the Sun, she shall have given birth to a daughter, and a new Sun shall rise. Wodan's sons Vídharr and Váli shall live through the fire, as shall Thunar's sons Módi and Magni, who shall inherit Thunar's hammer Mjöllnir. Balder and Hödhr shall be loosed from Hel then, and sit in Wodan's seat, and they shall remember all of the ur-old lore of the gods; Wodan's brother Hönir shall handle the blood-twigs of the runes. In a shoot of the World-Tree, called “Treasure-Mímir's Holt,” a woman named Líf (“Life”) and a man named Lífthrasir (“The Stubborn Will to Live”) shall hide through the fire, and they shall come forth, and people all the new earth with folk.
Like all true legends, Ragnarök can be understood on many levels. To the vitki (magician), it describes the initiatory process of destruction and creation which the soul must pass through on a cyclic basis, reaching a higher level every time. For everyone, it is a description of the process of death and rebirth, in which mind, might, and life all fall before the forces of destruction and the body is eaten by the greedy flames of cremation; but all of these are reborn in time, as the gods are reborn in their children. As cosmic theology, Ragnarök is an integral part of the Germanic religion, no matter how literally or metaphorically you choose to interpret it. Most of Wodan's works, especially the dark and devious ones, are aimed at staving off Ragnarök while he gathers his might to ensure that a new world can be reborn afterwards. Ragnarök is always a possibility; eventually it must be a certainty, for it is laid in the ørlög of the god/esses, but the works of both humans and god /esses can hold it off. This work is worthwhile because, although the ultimate results may be for the better, the possibility of improvement in the next cycle depends on the strength the forces of the god/esses can gather before the final battle takes place. Thus Wodan gathers his einherjar, the slain heroes of Walhall, because no one, not even he, knows for sure when the battle will begin: “the gray wolf gapes ever / at the dwellings of the gods.”(3)
This is his work of writing around wyrd; knowing that he must be slain, he fathers Vídharr to avenge him and free his soul from the belly of the Wolf Fenrir; knowing that the world must come to an end, he strives ceaselessly to be sure that the rebirth can take place; and in this he leads both the god/esses and those humans who are true.
(Excerpt from the Asatru/Heathen book Teutonic Religion by Kveldulf Gundarsson. Used with permission. To purchase an entire copy of the e-book Teutonic Religion click on the link.