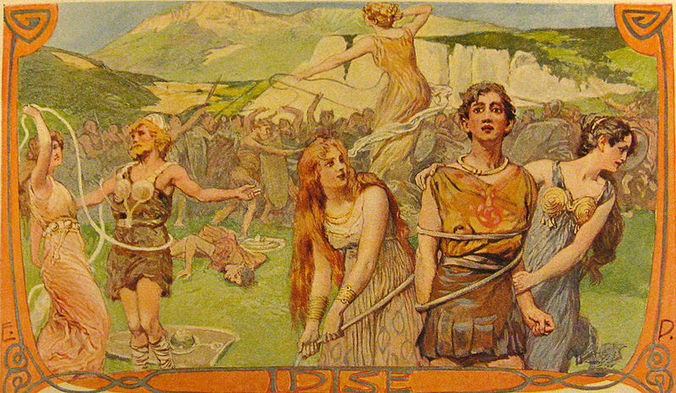 The Disir or Idises aiding their kin in battle.
The Asatru/Heathen religion: Idises (OLD NORSE DÍSIR)
The idises are the souls of the women of your family line – the eldest mothers, who still watch over their children through the generations. The first we know about these holy women comes from the Roman frontier in Germania, where a number of votive stone carvings and small (4-6 inches / 10-15 cm. high) terra-cotta sculptures of three women who wear huge round headdresses and sit holding baskets or cornucopias of fruits and grain in their laps have been found. Incense was burned on or before these statues; during feasts, they may have been decorated with garlands and had libations of drink or sacrificial blood poured out before them. The baskets of fruit and ripe grain which they hold suggest that like the Old Norse dísablót (“blessing to the idises”), their feast was held around harvest time. These statues bear inscriptions dedicating them to the Matrones – the “Mothers.” The round headdresses they wear are also very similar to the bridal headdress of Norwegian folk tradition, which may emphasize their maternal characteristics.
In the Old Norse sources, these women played a very large role in the religious life of the folk. The festival of Winternights was also called dísablót, and there are several references to a special hall being used for this purpose: in Ynglinga saga, Adhils dies when riding his horse around the dísasalr (“idises' hall”), and in Heidhreks saga, Heidhrekr's wife hangs herself in the dísasalr. The feast, however, was usually celebrated by family and close friends rather than as a great public ritual – which makes good sense, given that it was meant to show worship to the family's own elder kin. While men often asked special favor of the idises on their own behalf, it was women who led the feasts and reddened the harrow at the dísablót.
The idises are firstly concerned with childbirth: Sigrdrífa tells Sigurdhr: “Birth-runes you shall know if birthing you'd aid / and bring from mothers the bairns; / on palm shall you scratch them on span of hand's back / and bid the idises to aid.”(3) Snorri speaks of the idises as norns, in the sense that they act to lay ørlög: “There are many norns which come to every bairn when it is born to shape its aldr (“life-age” – see the chapter on Soul and Afterlife); and some of these are of the kin of gods, and others of the ætt (clan) of the alfs, and some are of the ætt of the dwarves ... Good norns from a good ætt shape good aldr, but those men for whom it is badly shaped are ruled by ill norns.” His reference to the meaningfulness of the ætt describes the way in which the idises act, not only as shapers of the family line, but as embodiments and transmitters of its ørlög and the whole spiritual complex associated with it. A family, or ætt, which is mighty of soul will have mighty idises who look upon its bairns with a kindly mood and give the best of gifts; but if the heritage carries an ill ørlög, the idises will bring that down upon the children of the line.
While the idises are usually helpful, they also have a dark and death-bringing side. In “The Greenlandish Lay of Atli,” Glaumvör tells her doomed husband Gunnar several dreams she has had; he dismisses them all until she describes the last, in which she saw dead women coming who wanted to “choose” him, and “I say that mighty were the dísir towards you.” Then Gunnar can no longer doubt that his wyrd is upon him and that his faring to Atli's hall will end in his death. At the end of “Grímnismál,” when he reveals himself in wrath Ódhinn tells Geirrodhr that “the dísir are angry” that is to say, that Geirrodhr's end is upon him.
The idises may appear in two troops, one white and one black. When they are dressed in white, they are weal-bringers and warders; when they wear black, they are the harbingers of death. They often appear mounted on horses. The idises take an active role in warding their living kin, either directly through dream-warnings or through more subtle means. In one saga, for instance, an idis afflicts her descendant with various illnesses in order to keep him from walking into an ambush that has been laid for him. In a sense, all of the goddesses can be seen as idises of great rank. The Frowe is called “Vanadís,” “idis of the Wans,” and Hella is named jódís, “horse-idis.” Like the goddesses, the idises were given their own temples and statues, before which their children could come to ask for their aid.
(Excerpt from the Asatru/Heathen book Teutonic Religion by Kveldulf Gundarsson. Used with permission. To purchase an entire e-copy of the book Teutonic Religion, click on the link.)