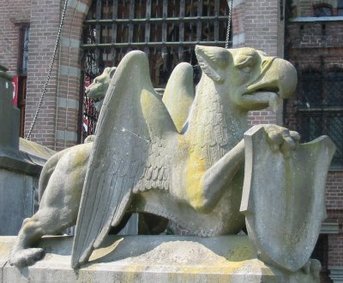 A griffin symbolizing one of the spirits (land-wights) whose duty it is to protect the land.
LAND-WIGHTS (OLD NORSE LANDVÆTTIR)
Land-wights are the living embodiment of the might of various features of the natural world. When the Norse came to Iceland, they found it well-filled with these wights, whose friendship they set about gaining at once. The weal of the land and those who dwell within it depends on the might and the happiness of the land-wights; if they are frightened or angered, the land will not thrive and the humans who live upon it will fare ill in all things. When Egill Skalla-Grímsson set up his nídhing-pole (a cursing pole, carved with runes and topped with a horse's head) against King Eiríkr Blood-Axe and Queen Gunnhild, he also turned his nídh against the land-wights, “so that all of them shall lose their way, none of them find nor reach his home till they drive Eiríkr and Gunnhild from the land.” From that time, Eiríkr and Gunnhild had no luck in Norway and were eventually forced to flee to England. The land-wights also ward their own country and lands from human invaders; they dislike the shedding of blood, and they are very loyal to those humans who gain their trust.
Land-wights are most often found dwelling in boulders and bodies of water, especially waterfalls. The friendship of a landwight is a useful thing to have; it brings prosperity and luck in all your works, even those which would seem to fall outside of these wight's normal realms of nature and fruitfulness of the earth. They can also tell you of what lies ahead in your life and advise you on the best things to do and the best times to do them.
The land-wights appear in various forms. Sometimes they are human-like; sometimes they appear as trolls, sometimes as beasts. The national land-wights of Iceland, who appeared and drove off the wizard of the Danish king Haraldr Gormsson when he went in the shape of a whale to see if Iceland might be successfully invaded, are the dragon at the northeast, the bird at the west, the bull at the southeast, and the rock-giant at the south. The wizard saw each of these creatures to be of gigantic size and followed by a great host of smaller creatures of the same sort, ready to battle him so that he could not reach the land (had he succeeded in doing so, he would have known that the luck of the Danes was great enough to overcome Iceland's might at that time and King Haraldr would have ordered an invasion).
If you should have to move a large stone from its place, you should make very sure that you have warned any in-dwelling wights well in advance so that they have a chance to move. The same courtesy should be taken whenever you do any sort of major landscaping work, whether it is building a house, clearing trees from an area, draining a marshy spot, or altering the flow of a stream. Many Icelandic farmhouses today have large boulders which they will not plow around nor allow their children to disturb for fear of annoying the land-wights.
To meet with the land-wights, find such a boulder or go to a waterfall or the peak of a hill. Take some food and drink; hallow it to them, eating some yourself and leaving some; then tell them who you are and what you want. Again, remember that politeness is the most important thing in dealing with such wights; they are not like the demons of ceremonial magic, who can (and must!) be dominated and harshly commanded in specific detail, but rather they are free beings who have no reason to wish you ill – or even to deny their help to you – unless you manage to personally offend them.
(Excerpt from Teutonic Religion by Kveldulf Gundarsson. Used with permission. To purchase an entire e-copy of the Asatru/Heathen book Teutonic Religion click on the link.)