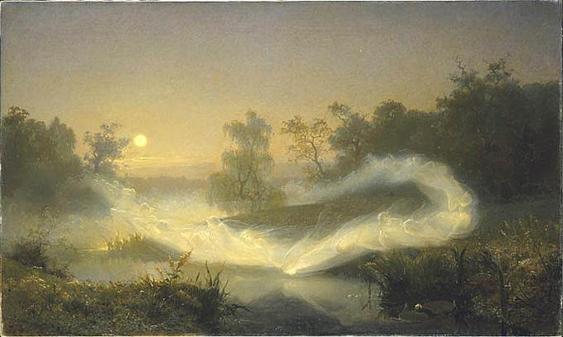 Alfar or Alfs
The ancestors in the Asatru/Heathen religion: Alfar (Alfs, Light Alfs, Dark Alfs.)
The alfs are often seen and called upon as the male counterparts of the idises: the souls of male forebears who see to the weal of their living kin. This is the role which they most often play in the practice of Ásatrú today. There are several different sorts of alfs, however, as the folklore of the Teutonic peoples attests to richly, and it is important to know the difference between them.
Traditionally, the alfs are divided into three sorts: the Light, the Dark, and the Swart or Black. The mound-alfs – the ghosts of dead men – are those classed as Dark Alfs; the Light Alfs, which also come under the rule of Fro Ing, are ghosts of air and brightness, fair to see and dressed in shining colors. The Swart Alfs are also called dwarves; they are ugly to see, but also mighty and skilled craftsmen. The dwarves were made out of the maggots in the flesh of Ymir after Wodan and his brothers slew him. They are spoken of as the children of Dvalin, and it was Dvalin who taught the runes to them.
The Old Norse sources make it clear that many men, once laid in the howe, did indeed become alfs who looked after the udal lands and to whom blessings were often poured and sacrificial meat given when their help was needed. That King Óláfr who was buried at Geirstadhr and called Geirstadhaálfr because of the help he gave his folk after his death is the most notable example of a human actually being identified as an alf within a short time of his burial. Most of the hills at which sacrifice to the alfs were made were indeed barrow-mounds, though this had often been forgotten by the folk who made the blessings there; they remembered only that beings of might dwelt within.
Alfs of this sort are strongly tied to the fruitfulness of the land; it is for this reason that Fro Ing is said to be the ruler of Alf-Home, for he is the greatest of the alfs, just as the Frowe is the greatest of the idises. This particular type of mound-alf is always male; it is these alfs who are the counterparts to the idises, and who are called upon together with the other Wanic powers at the Winternights feasting.
In Sweden, cup-like holes were made in rocks together with carven sun-wheels from the Stone Age through the Iron Age; and folkloric tradition associates these holes with the alfs. Many of these stones, though not all, were placed at burial sites. It has been traditional up to recent times to make blessings by pouring milk or ale into them. Blessings to the alfs are also made by setting a cake under the first furrow plowed or upon rocks where they are known to live – in Europe, usually the ancient standing stones.
The term Dark Alfs seems to cover, not only the mound-dead, but the other sorts of alfs who dwell in wood and stone. These alfs may be homeless ghosts, or a sort of being more akin to the landwight. They are sometimes well-disposed towards humans, but bring ill just as often. Paralysis and rheumatism are said to be caused by elf-shot, and the Anglo-Saxons had a charm against “water-elf disease,” that is, chicken pox. The ill will of alfs is also said to distress and confuse the mind of their victim. At the same time, a human who does a favor for an alf may expect a fair reward and should take it gratefully, though it may not seem so good at first. There are several tales in which such a helper is given what appear to be dead leaves or clods of earth which, when he gets home, turn out to be pure gold. Such tales are often metaphors for the gifts of knowledge and wisdom which, though seldom appreciated at first, turn out of be the fairest gifts possible. The alfs are givers of good counsel and understanding, as shown by the Anglo-Saxon name Alfred – “alf-rede”; the woman's name Ælfgifu, “Alf-gift,” also calls on the alfs to befriend the child who bears it.
Of all the alfs, it is the Dark Alfs who share the Middle-Garth with us who have most to do with humankind. They are human-like in looks, very pale, as one might expect of the dead, and usually richly clad. They are seen most often at night, in the winter half of the year (from Winternights to Eostre, or roughly autumnal equinox to spring equinox).
The Light Alfs dwell in Alf-Home, in the upper airs of the Middle-Garth near to the Ases' Garth; it is these alfs who come to the feasts of the god/esses, as described in the Eddic poems. They are the most beautiful of folk; there was a Norse expression, “beautiful as an alf-woman,” which described the height of womanly loveliness, and the Anglo-Saxons had the term “ælfsciene,” “elfshining,” as a compliment. In The Road to Hel, Davidson points out that Freyr and the alfs are both associated with the Sun, Freyr by virtue of his power over rain, sunshine, and the earth, and the alfs through the name which is given to the Sun in several texts: “Álfrödhull,” “Glory of the Alfs”;(5) and it is surely the Light Alfs who refer to her as “Fair Wheel,” for the Dark Alfs do not care for her light and the Swart Alfs are turned to stone by it. These alfs are helpers to humankind, kindly and well-disposed, though they are seen less often than the Dark Alfs. They appear especially on high places around Eostre-time, as flashes of shining white or as white-clad women.