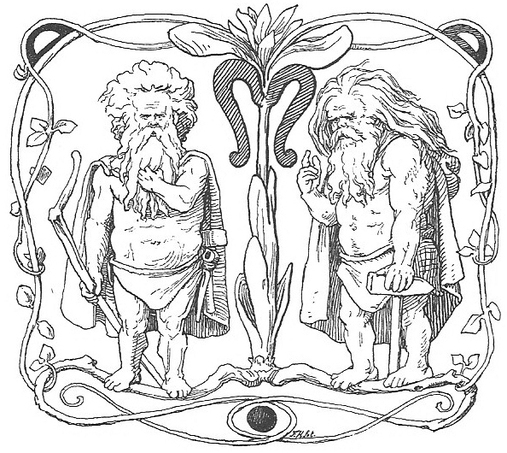 Dwarves or Swartalfs
The wights of the Asatru/Heathen faith: Dwarves or Swartalfs:
The Swart Alfs, or dwarves, dwell in rocks and in the depths of the earth. Like the Dark Alfs, they are very close to the dead and perhaps sometimes dead folk themselves, as the dwarf-names Dáin (“the Dead One”) and Nár (“Corpse”), imply; Swart Alf-Home overlaps both the lower reaches of the Middle-Garth and the higher reaches of Hella's realm. In German tradition, a race of Swart Alfs was also called Nibelungen – literally “kin of the misty darkness,” but also a name tying them to the realm of Nibel-Home.(6)
In folklore, the dwarves are always male – they appear as short and sometimes twisted, but thick-thewed and mighty men with gray beards and skins darkened by centuries of working at their forges. However, Snorri also refers to some idises as the “daughters of Dválin,” so the dwarf-kind must include females as well. Still, male dwarves lust after both human women and the daughters of the Ases; the Eddic poem “Alvísmál” is spoken by a dwarf who had come to the Ases' Garth in order to claim Thórr's daughter Thrúdhr.
According to the Old Norse tradition, Dválin was the greatest ruler of the Swart Alfs, from whom the dwarves learned the runes; the Swart Alfs are all referred to as his children. In Germany, the ruler of the Swart Alfs was called Alberich (a name familiar to any lover of Wagner); the Old Norse form is Álfaríkr. Since this name simply means “ruler of the alfs,” it is probably a title rather than a personal name, so that one might speak of “Dválin Álfaríkr,” or call upon the might of the Swart Alfs in this name.
Although all the alfs are great craftsmen and magicians, it is the Swart Alfs who are the greatest smiths in the Nine Worlds. The treasures of the god/esses – Wodan's spear, Thunar's hammer, Sif's hair, Fro Ing's ship and boar, the Frowe's necklace, and the ring Draupnir – were all made by them, as was the sword Týrfing, ancestral sword of the kings of Sweden, and many other mighty works of craft. Dwarves also brewed the mead of poetic wod from honey and the heart-blood of Kvasir, the wisest of all wights. The dwarves have been known to teach their crafts to especially gifted human beings at times.
Dwarves are the keepers of all treasures underground; they are sometimes greedy and stingy with their goods, but their ill will is more often due to the intrusions of humans who think they have a right to dig mines and take the riches of the earth without asking the true owners first. If you often work with metal or stone, it is good to make gifts to the Swart Alfs at Yule time, burying a piece of your craft in the earth together with some food and a draught of ale. Sunna's light turns dwarves to stone, but they are able to fare about by day in the shape of stags. Dwarves can also take the shape of spiders.
Dealing with any of the alfs is often rewarding, though it can also carry perils with it. They are swift to take offense at slights and remember grudges for a long time. The alfs, especially the Swart Alfs, are very strongly aware of “a gift for a gift,” and they are never satisfied until all scores, both of friendship and of enmity, are evened. If you spend a great deal of time working with any of these wights, you also make yourself likely to take on their characteristics during your lifetime and to join their numbers after death.
(Excerpt from the Asatru/Heathen book Teutonic Religion by Kveldulf Gundarsson. Used with permission. To purchase an entire e-copy of the book Teutonic Religion click on the link.